Please check out this write up featured on the Hunter Website a few years back:

Customer satisfaction is paramount when it comes to being entrusted with designing and installing a world-class irrigation system at one of New York’s most popular attractions. But when your customers act like animals because they are animals, making the customer happy takes on a whole new meaning!

Installing a wide range of Hunter products at the world-renowned Bronx Zoo has kept the crews at Aqua Turf Irrigation Systems LLC busy, as the Elmsford, N.Y., company works to complete the largest irrigation project for the 107-year old institution. 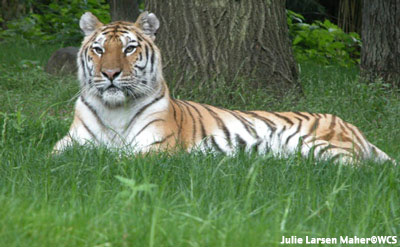 Tony Dilluvio and Joe Pierorazio, Platinum level Hunter Preferred Contractors and co-owners of Aqua Turf, are no strangers to the Bronx Zoo, which was one of the first zoos in the U.S. to move animals from cages into more natural habitats. Since acquiring Aqua Turf in 2003, their company has done several irrigation projects at the world-famous attraction, forging a strong partnership with the zoo’s numerous curators to ensure that every last detail is considered.

“This is a highly competitive business, so you have to work smarter, starting right with the bidding process,” says Pierorazio, who helps manage the financial end of the operations. “This is the approach we take with all major projects.”

Hunter systems can be found throughout the 265-acre zoo, in some cases replacing other products that have been relegated to the “endangered species” list. Dilluvio estimates that his company has already installed about 1,000 PGP® rotors and Pro-Spray® sprinklers, and more than 100 PGV and solid brass HBV valves. Some two dozen Hunter ICC controllers, many operated by ICR remotes, have also been installed, and plans call for a Hunter IMMS™ central control system to tie everything together. “We’ve even used some Hunter I-90s mounted on a riser in the Lion Exhibit, where we needed a real long throw,” says Dilluvio, adding quickly that “you don’t really want to get too close to those big cats anyway.”

The Big Apple’s mild winter has enabled the Aqua Turf crew to quickly move ahead of schedule and continue working during the zoo’s off-season. Off-season for zoo-goers, that is, not for the zoo’s 4,000 animal inhabitants.

“The overriding mandate for every project at the zoo is that the animals’ welfare comes first,” says Dilluvio. “If an animal is sick, stressed, or even in mating season, then all construction can stop at a moment’s notice.”

Creating an irrigation system for where the buffaloes roam is not without its special challenges. Within the Bison Range, the rotor heads had to be installed not only to withstand the weight of bison, but to ensure that the heads would not sink and form a dangerous depression that could injure the animals.

The solution? Aqua Turf Irrigation Systems buried the main line about 20 inches, using Hunter swing joints to connect the sprinklers. The bottom eight inches or so were filled with crushed stone, while the top 12 inches were filled with stone dust, which is finer and more highly compacted to support the heads. Gravel was packed around the heads and graded for water drainage. “Bison have been walking all over them for several weeks now and everything looks good,” says Dilluvio, noting that his company used its experience from installing heads at polo fields and race tracks, where ponies can really give them a direct hit.

Designing and installing irrigation systems in animal exhibits must also take into account all the surrounding plant life, so Tony has been working closely with the zoo’s horticultural department as well. “Every detail must be handled to make sure the system is performing well for both the animal and plant life,” says Dilluvio.
Such cooperation enables Aqua Turf to integrate irrigation systems into the design at the start of the process. “Irrigation has just recently become a part of the exhibit construction instead of being an afterthought in the process,” says Dilluvio, who is proud to have his company play a role in ensuring that the Bronx Zoo remains one of the world’s greatest attractions.